Whaleys Stages were approached to provide the London Palladium with some stunning Front of House drapes for their performance of Cinderella.

Cinderella at the London Palladium

The London Palladium is a Grade || West End Theatre, and is one of  the most famous theatres in London. It first opened on Boxing Day 1910 and by the 1950s, it was regarded as the ‘Ace Variety Theatre of the World’. Part of it’s rise to fame derived from its role in hosting its first Royal Variety Performance, which has lead to a further 39 performances played here! Seating over 2,000 audience members, it has been home to many notable shows and performances over time including; Joseph and the Amazing Technicolor Dreamcoat, Oliver!, Chitty Chitty Bang Bang, The Sound of Music, The Wizard of Oz, Cats.

Whaleys recently had an enquiry from Ian Westbrook at 3D Creations, a dearly valued customer of ours, to manufacture Front of House Drapes for Cinderella, at The London Palladium starring, Paul O’Grady, Julian Clary, Amanda Holden and Nigel Havers.

Each drape was made to an 8 metres width and a 7.5 metre drop, with 100% fullness, made out of Pink Crushed Velvet, with a Lupin Blue Cotton Lining, and Gold Fringe Tassel on the base. Each had attachments on the rear to attach to the system at the theatre, to pull them up, to create the swag shown in the images and our YouTube video.  After completing the manufacture, the curtains were sent to have 40,000 crystals attached by hand to give them the sparkle required for panto at a top London Theatre. If you are looking for any Stage Drapes, please contact us. As you can see, we can rise to a challenge!! 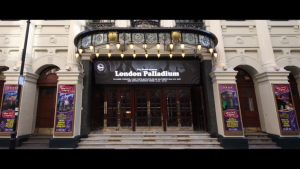